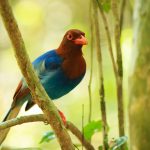 After initiating the first COVID lockdown in the island, inbound tours had to take a considerable break amidst the pandemic. But during the post-lockdown period, we were able to initiate some incredible adventure and wildlife tours, which were mainly targeted at the 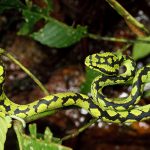 Among them was the birding adventure to Sinharaja National Reserve.

We ventured into Sri Lanka’s largest tract of lowland rainforests and UNESCO World Heritage Sites in search of the beautiful endemic birds found in this region. Sinharaja arguably is the most important ecological site for the island with the highest rate of endemism seen in both flora and fauna. The island has 34 endemic species of birds, 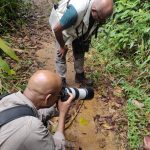 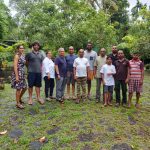 of which over 22 can be seen here. Our group was led by our head naturalist who with over two decades of field experience excelled in showcasing to the client’s 26 endemic species of birds, and 67 species of birds, 5 species of mammals, 6 species of reptiles, 14 species of butterflies and 5 species of dragonflies. Among the highlights of the tour was the sighting of two Serendib Scops Owls, arguably the most sought after bird in Sri Lanka. These amazing owls are very difficult to find especially given their nocturnal nature. The use of the best local trackers helped in locating a roosting pair deep in the jungle and enabled the tour-goers to witness an unforgettable sighting. 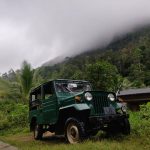 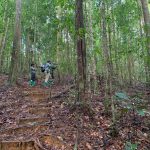 A venture into the natural world is truly enhanced by its storytellers, and a world-class naturalist brings out the wonders of nature in a whole new light!

One of Sri Lanka’s premier properties, Ulagalla is a beautiful blend of elegance, luxury and old-world charm. The boutique hotel is located in a sprawling 58-acre lush garden and centred around a 150-year-old mansion which is rich in culture and has historical significance. The hotel consists of 25 villas with private pools, meticulously designed and built to maintain the ecological balance of its surroundings. This is a perfect location to relax and unwind. But also is one of the best-located hotels to explore the Cultural Triangle. Ulagalla is located 20 minutes from the ancient city of Anuradhapura, one of Sri Lanka’s important historical cities and UNESCO World Heritage Site’s. Also, a day excursion to Sigiriya, Dambulla, Wilpattu and Minneriya National Park is possible while based here. One of the most popular experiences is a guided tour of the organic farm in the property where one can pick fresh produce and head to the kitchen where the chef transforms the produce into delicious Sri Lankan dishes which will be your lunch for the day.

A stay at Ulagalla has so much to offer and one of the best luxury boutique properties in Sri Lanka. 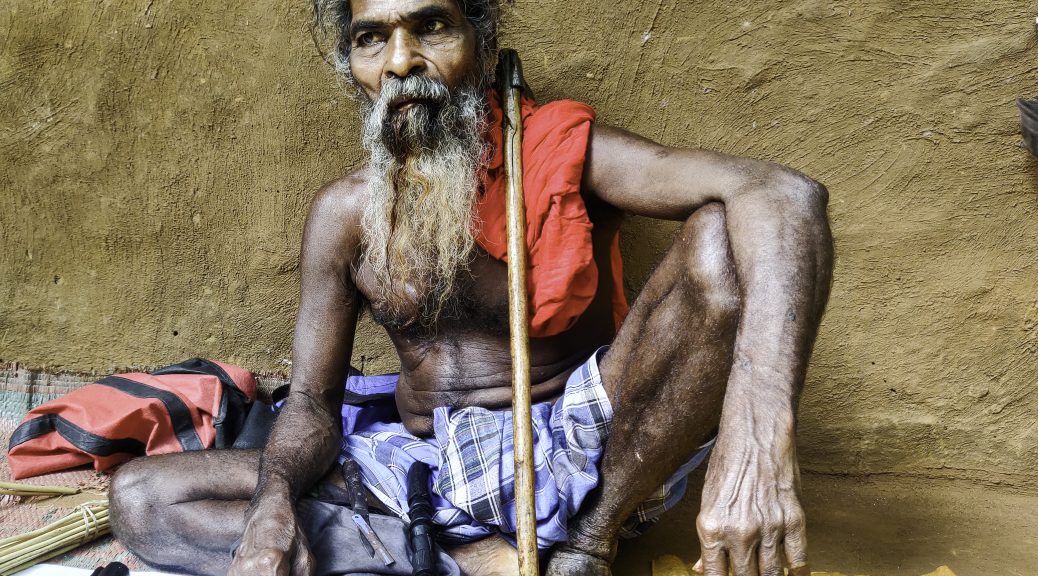 The last of a disappearing race, they are a people who date back well beyond the arrival of the Kings from India in the 5th Century BC. They are the indigenous people of Sri Lanka. Archaeological and anthropological studies have revealed that they date as far back as the stone-age. Over the years the Veddahs began to conform to their colonizers, and adapt the customs and practices of the Sinhalese and the Tamil settlers such as subsistence farming.

The remaining Veddahs live in reservations in the jungles of Sri Lanka and still practice some of their traditional ways of life such as honey gathering and hunting which they are permitted to carry out.

Majority of the Veddahs live in the South Central jungles of Mahiyanganaya. Others are scattered in regions nearby such as Rathugala which is close to Gal Oya National Park. Some Veddahs live along the East Coast of Vakarai and have adopted most of the customs and language of the Tamil people in the area. The Veddhas are a Paleo community and live off the hunting and gathering they carry out in the jungles and wilds they live in. One of their staple food is wild honey, which they collect by climbing trees where the beehives are, and using smoke from burning dried leaves to ward off the bees. The honey is used to preserve the meat they hunt. In the modern age, they also carry out basic subsistence farming to supplement their hunting, such as corn and millet.

The traditional tool for hunting is bow and arrow which is used with great skill and precision, along with the hand axe which every Veddah uses for protection against dangerous animals in the jungle such as the Sloth Bear who is well documented to attack and maul people walking in the forest. Ancient song and dance is still practised today and passed on to their younger generations as oral traditions. They are people with a close connection to nature, and their ritualistic songs communicate with the elements. They have their own language, which is different from the widely-spoken Sinhalese, and it is passed down from generation to generation.

If you would like to visit these enigmatic people, a very special experience can be arranged in either Mahiyanganya, in the region of Dambana or at Rathugala in the region of Gal Oya, where both of these tribes welcome visitors to see their way of life. A walk in the jungle with the Veddahs will reveal the incredible harmony between man and nature, and the nature of these communities and experience firsthand their ways of life.

Unique experiences can also be arranged to venture deeper into the jungle with the trip in search of wild bees honey, or an exclusive private dinner with the Veddah-chief where you can converse with him on the history of his people, their ways of life and philosophy of life, and the challenges of preserving them in the modern world.

The real treasure of Sri Lanka is its people, and the Veddahs are part of a vibrant kaleidoscope of communities which make Sri Lanka an island like no other. 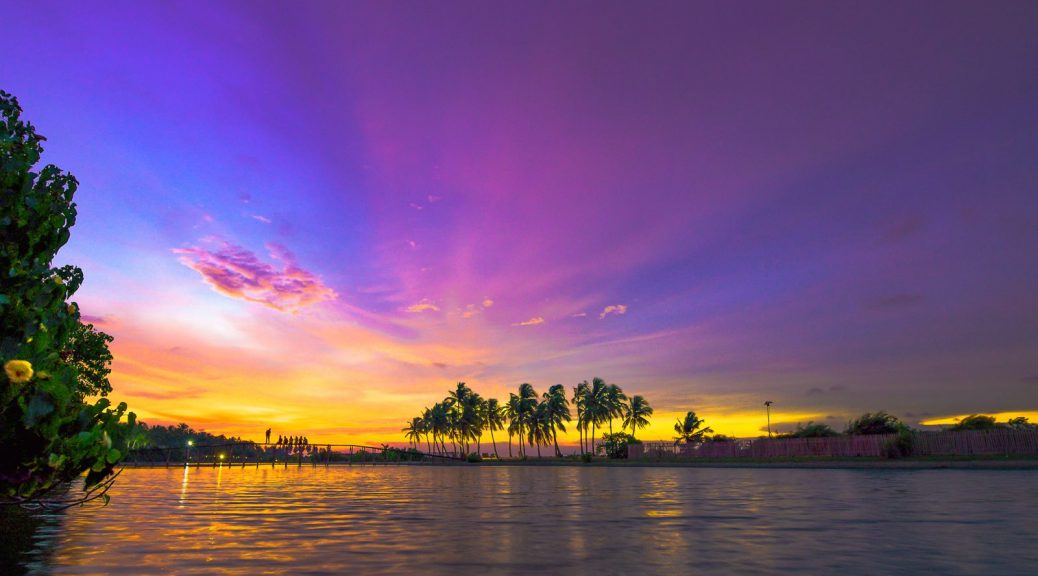 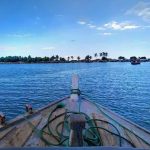 Sri Lanka is an island with many mini islets surrounding it. Out of which, the archipelagos of Jaffna and Kalpitiya are famous among travellers for namely island hopping.

The islands of Kalpitiya have many adventures and experiences available within them, out of 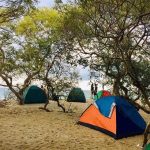 which the Island of Battalangunduwa remains the capitol. Battalangunduwa is the second-largest island after Uchchimune and Mohontuwarama, located at a distance of about 25 km from the mainland.

Battalangunduwa is a beautiful island covering an area of 150 hectares. From the Kalpitiya jetty, you have to travel 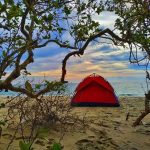 about 28 nautical miles to reach Battalangunduwa Island. The islanders, who make a living from fishing, live a different kind of life on this island. Battalangunduwa Island is undoubtedly a perfect place to enjoy a cool evening breeze, a spectacular view of the setting sun, or even a night in a tent enjoying the sweet sound of the waves crashing against the shore.

First task is to get there. Two passenger boats ply to the island from the Kalpitiya jetty. The regular passenger ferry 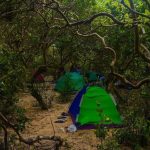 service begins daily at 8:30 p.m. It’s about a 3-hour drive. The fare per person is around LKR 250. There is also a luxury passenger transport service with comfortable seating. But for that, you have to reserve seats in advance and of course pay more. Make sure that you take everything you need with you on the way because you can’t go back mid-way. Keep in mind that there are no five-star hotels or shops in Kalpitiya but a humble fishing village. So don’t forget to show some love & support to these wonderful folk as you plan a nice beach camping experience here. 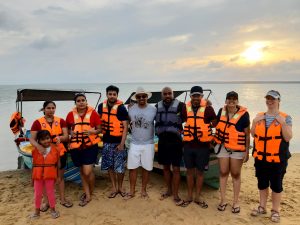