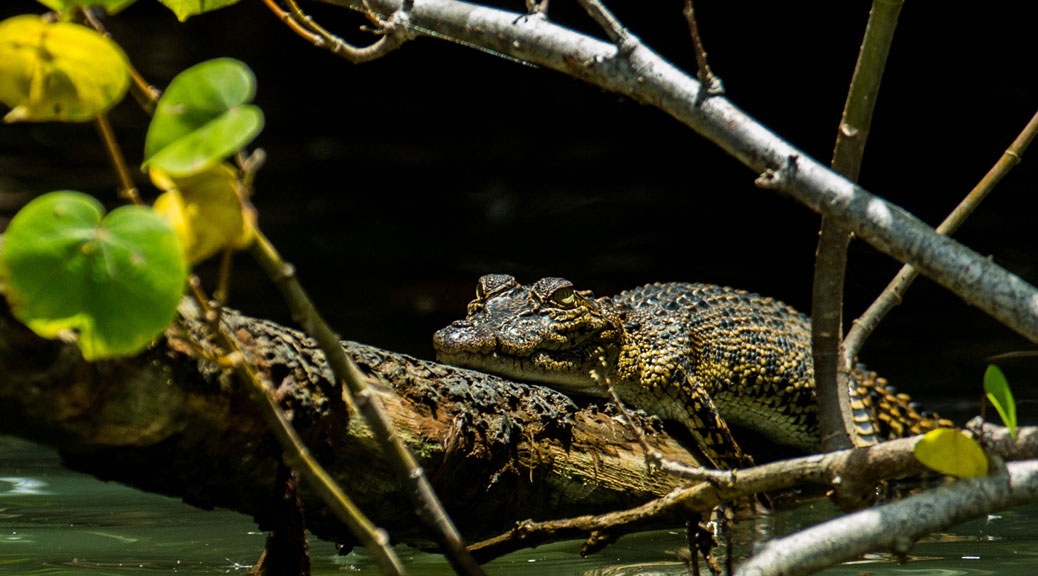 The saltwater crocodile, the largest reptile on earth, is one of the most dominant apex predators found in Sri Lanka. Despite its reputation, they are seldom seen but known more by reputation. Growing to a maximum of over 18 feet in length seeing these primeval predators has always been my dream. The most number of records of this iconic species comes from the Nilwala River in Matara on the South Coast of the island. Sadly due to people living close to the water’s edge, this river has reported several crocodile related deaths.

For many years I researched on the possibility of creating a unique experience with these crocodiles. Finally I managed to find someone committed enough to venture out into these waters in search of these aquatic predators. Chandika Doshan is an inspiring man from the shores of Matara, a former fisherman who lost everything in the 2006 Tsunami. After realizing the potential for tourism in this river, he decided to hang up his fishing nets and develop a boat for river safari’s on the Nilwala.

Setting off from an embankment close to the Matara Bridge, Chandika’s operation is well thought of and professional. The boat is around 20 feet in length and complete with comfortable seating and an overhead canopy for the shade. Upon boarding we were handed chilled bottled water and at the end of the river a refreshing King Coconut is served by Chandika, which is a great way to beat the heat and humidity. The river safari is carried out both in the morning and in the evening.

With camera’s ready and bubbling with excitement we set of on our adventure. Ten minutes into the boat-ride we came across our first crocodile, which was a mid sized animal who surfaced for a brief moment and went straight under. Moving down the river it’s amazing to see the varying habitats of mangroves and forests along with areas of human habitation. We came across many crocs along the way, most were shy and went underwater when approached, but the larger ones remained afloat. Chandika had the eyes of a hawk and spotted the crocs from far off, as I realized it takes some getting used to in order to spot them while in the water.

About midway into our journey we came across the King of the River, a monster male croc around 16 feet in length. It swam across the river in front of our boat, back and head raised high along with his “dinosaur like” tail raised above the water to show his true size. It was one of the most amazing and exciting experiences of my life. I have been inches from elephants, bear and leopards but nothing prepared me for what was in front of our boat that day. This was a true aquatic predator in peak condition and we are in his element at almost eye level and it was a feeling like no other. The big croc started swimming in front of us along the river and we followed. For over a mile we followed the big male who Chandika claims is known to swim in front of his boat. This was a perfect hunter which was evolved over millions of years to what it is today, the largest reptile on the planet, and I was fortunate to witness them in their natural habitat. Along the way we came across a baby croc settled on top of one of the mangrove roots.

The boat ride took us across a vast riverine habitat with mangroves, marshes and human settlements. There were many interesting birds along the way, such as Purple Heron, Common Kingfisher, White Bellied Sea Eagle, Brahminy Kite and Stork Billed Kingfisher and the waters and mangroves were abundant in Water Monitor Lizards the largest species of lizard on the island. This riverine cruise is a unique and different form of safari which covers a one of a kind aquatic habitat which is home to a great number of species.

In total we spotted over 12 crocodiles from small hatchlings to giants like the “River King” who is over 16 feet in length. This river system has a healthy population of Saltwater Crocodiles, which causes conflict with people who live by its waters. Along the way we witnessed many crocodile proof fences which are set up for people to bathe in safely. Education and awareness is key to a successful co-existence with these predators.

Our river safari opened our eyes to a whole new world of opportunity. As an experience “off the beaten track” this sits high up in the list, as its originality and excitement is hard to match. This is an amazing outing in the heart of the Southern Coast and a great way to get out and experience an unknown part of Sri Lanka.