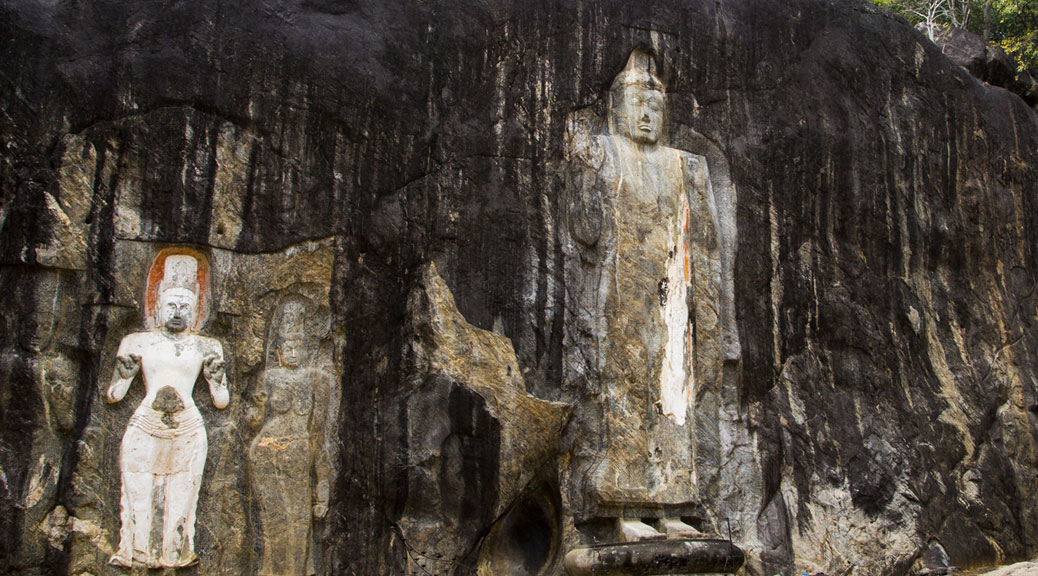 On the way back from a tour in Arugam Bay and Kumana National Park we decided to explore the ancient ruins of Buduruwagala. This is one of the least known and seldom visited archeological sites in the country. The name Buduruwagala literally means “Rock with an image of Lord Buddha”. Although there is no documented information about this site in the ancient scriptures, Different historians have dated these statues from the 6th centuary to late Anuradhapura period. (between 8 – 10 Century). These carvings are of the Mahayana Buddhist style and belongs to the Pallawa- Sri Lankan art tradition.

This site can be accessed through Wellawaya, but for visitors coming from the Bandarawela and Haputale areas would need to come via Ella. The best route if one is coming from Colombo is to go via the Ratnapura-Balangoda Road.

Along a well paved road we came across the stunning beauty of the Buduruwagala Lake. The setting was almost unreal, with soothing waters lined with rocky hills and many trees. Crossing a bridge we noticed the waters are rich with fish, and given the setting it should be ideal for birdlife, but as we are visiting during the heat of the day there were non to be seen.

Passing the lake we reached a car park from where it’s a short walk up some ancient stone steps through a shady forest grove. We are not expecting what lay ahead as though images on the internet showcased what we would see, nothing can give you the real feeling of awe that seeing the site in person. I felt like I am at a set of an Indiana Jones movie with a discovery of a lost temple. The site was isolated and serene with nobody in sight. I just stood at a distance for a few minutes in awe, admiring the beauty of the rock carvings that lay before me. The site is a massive granite rock which has a central statue of the Lord Buddha which is flanked by three statues each of Bodhisathva’s and their consorts. The detail in the carvings are amazing, and one of the Bodhisathva statues has remnants of the white plaster it would have been covered in back in the day.

The sun was burning hot, but I had to get some great angles of this site to bring out the true effect of these carvings. As respect it is important to remove ones footwear at the site and best to wear clothing covering the legs such as trousers or a sarong.

The intricacy and detail in which the carvings are done are astounding and the setting, surrounded by large trees is calm and serene. One can spend hours in peace and tranquility in this location.

This is one of the best kept secrets of Sri Lanka’s historical heritage and is a fitting example of the skills of the artisans and craftsmen of ancient Sri Lanka.