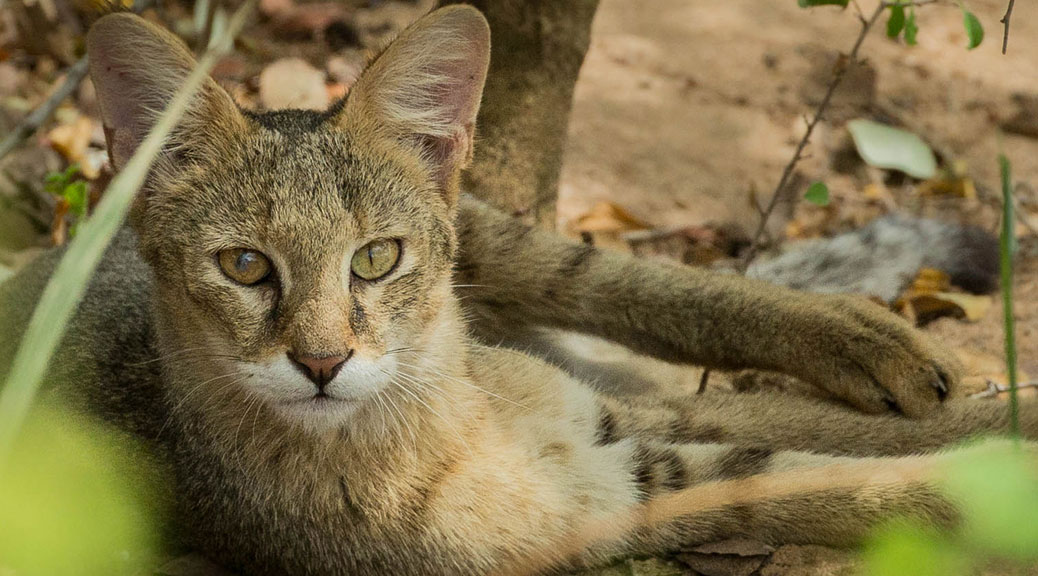 When one thinks of wild felines of Sri Lanka the leopard may come first into ones mind. But there is a more elusive and secretive cat out there. The Jungle Cat is a small species of cat found in scattered populations in the dry zones of the island. Along with the Fishing Cat and Rusty Spotted Cat this is one of the three species of wild cat found in Sri Lanka while the Leopard being categorized as a Big Cat. Known as “Kola Diviya” and “Wal Balala” this smaller species is known more by reputation than by actual sightings. The sightings themselves are known to be very brief given the shy nature of these felines.

One of the best places which I have heard of to have a fair population of Jungle Cat is Udawalawe National Park. With determination to somehow photograph one of these shy cats I set off on an expedition. I was joined by Lionel an expert tracker and seasoned ranger of the park. We scoured the land with sharp eyes looking in all directions, when suddenly our safari driver hit the brakes and we turned left to see a small cat running away into the bushes. The cat had been sitting out in the open, when it panicked and ran for cover on sight of our jeep. We decided to wait patiently with a hope that the Jungle Cat might come out. Lionel taught me the signs of the cat’s presence which are the loud alarm calls of small birds which often fall prey to these silent predators. After a long wait, we spotted some movement in the bushes, and out came not one but three jungle cats. From what we understood it was a mother with two semi adult kittens. Being from the cat family the kittens were playful, but all three were quite shy and skittish to our presence and upon noticing our vehicle ran back for cover.

The next day while moving around the same road we came across another cat sitting in the bushes. After reversing back to the spot we saw it slowly got up and walked away, giving us a few glances. This was a larger cat and probably a male, and stood around 13 inches on the shoulder. With long legs the Jungle Cat is a streamlined hunter and has a unique feature of having ear tufts on the tips of its ears.

In the afternoon while on safari, Lionel spotted another cat fast asleep under some bushes. Like any house cat who sleeps after a meal this Jungle Cat was oblivious to our presence. Quietly we observed it in slumber. After some time it slowly woke up and stretched itself, suddenly realizing our presence which startled it. After staring at us for a few seconds the cat made a retreat deep into the bush. In the evening we saw another cat long a safari trail walking along the road. We followed it for over 1 km before it went back into the bushes.

I never expected such luck in my sightings which were thanks to my trusty tracker Lionel and our safari driver Sanath who both worked together to scour the land in search of these elusive felines. From this tour it is evident that there is a fairly high number of Jungle Cats found in Udawalawe which is a welcome attraction in addition to the large number of elephants seen throughout the year in the park.